If you search for legendary moonshiners, you will come across a man named Marvin who is popularly known as Popcorn Sutton.

He made moonshine using a 100-year-old family recipe and sold it from the back of his Ford Model A truck.

Popcorn Sutton was an American moonshiner and bootlegger who lived from 1946 – 2009.  He first became popular after writing autobiographical guides to moonshine production and he also made self-produced home videos where he explained his methods.

In 2002, he appeared in a Neal Hutchens documentary Mountain Talk and quickly became popular in various documentaries following this successful appearance.  Part of his fame was due to the fact that he was sentenced to 18 months in federal prison for illegal distilling spirits. Want to make your own moonshine? Click here to purchase one of our stills

You can no longer buy moonshine produced by the original Popcorn Sutton because he died in 2009 after committing suicide to avoid jail and because of his cancer diagnosis.  But this original recipe still exists.

While the original popcorn company no longer produces this whiskey, there are however still some out there who do make it using the original recipe and guidance from Popcorn's homemade videos.  You can however still buy some Popcorn Sutton branded products directly from the original company.  Or make your own! Click here for the recipe. 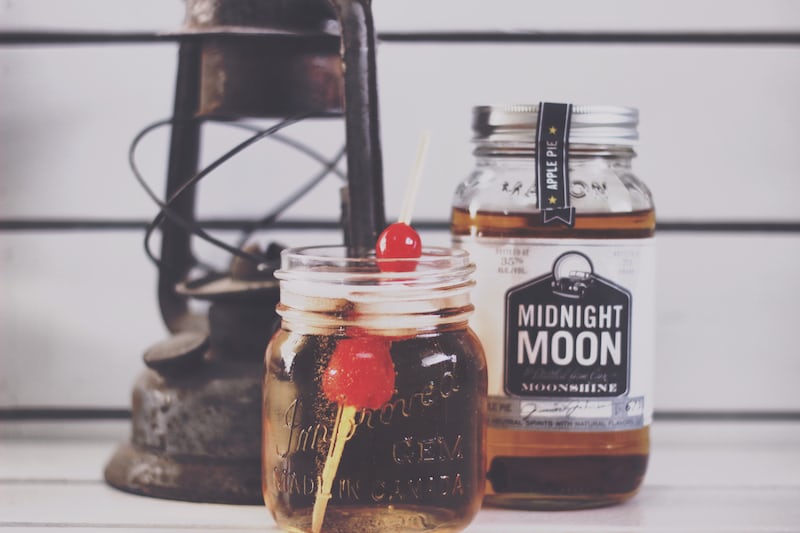 There are quite a few Popcorn Sutton fans out there who carefully watched his methods on documentaries to reproduce his original recipe.  You can even find the recipe online if you want to give this infamous Tennessee Whiskey a try.

Some whiskey makers do produce the original whiskey.

Alternatively, you can buy truly authentic empty moonshine bottles from eBay.  eBay has both original bottles used by Popcorn's wife available for you to collect.

There are also rumors that the original Popcorn Sutton site will also start reproducing their legendary whiskey soon.  So keep your fingers crossed because you might just be able to buy this original brand in the near future.

Who Is Popcorn Sutton's Wife?

Popcorn's wife, Pam Sutton, worked hard to continue her husband’s legend.  In 2010 she partnered with Hank Williams Jr. to start distilling and distributing her husband’s whiskey with his name on the brand.

The company did sustain some damage in 2013 after being sued by Jack Daniels’ Properties for using a bottle that had a similar shape to the Jack Daniels brand.  In 2016, the design of the bottle was changed to a clear round bottle with a similar label.

The company was also sold in 2014 with acceptance to the popcorn whiskey brand.  They have yet to continue reproducing this fine tasting whiskey.

What Happened To Popcorn On Moonshiners?

Popcorn loved moonshine and he was tremendously popular for his fine brew.  Back then, the production of moonshine was still illegal and he was soon caught making and selling his liquor.  He was arrested for making moonshine and the illegal possession of a .38-caliber handgun in 2009.

Originally, he would have been sentenced to 24 months in jail but the U.S. District Judge Ronnie Greer considered his age of 62 years and his diagnosis with aggressive cancer and reduced his sentence to 18 months that was to be served under house arrest.

Rather than spend the rest of his life under arrest, Popcorn Sutton sadly committed suicide by carbon monoxide poisoning in his Ford pickup. If you cannot find Popcorn Sutton Moonshine for sale, you can always try to make this moonshine yourself.

However, it is important to try to stick to Popcorn Sutton's original recipe and methods.

He also used equipment such as a boiling pot, fermentation bucket, airlock, siphon tube, cheesecloth, and a copper moonshine still to produce his moonshine.

It is important to follow his recipe and instructions carefully or you won’t be producing a moonshine with the same characteristics and taste.

You can check out one of his recipes right here.

It is, however, important to note that Popcorn Sutton Company still retains their original rights over this name. Therefore, you probably won’t be able to resell your product under the same name but rather as a version of this original beverage.

Many moonshine lovers and Popcorn fans are still keeping their fingers crossed for the original popcorn company will start to make their infamous Tennessee whiskey in the near future.

But for those who cannot wait,  the best alternative is to make your own whiskey.

Popcorn left behind lots of instructions and guides on the best ways to make this authentic recipe.

Making your own Popcorn Sutton moonshine is a great way to learn more about this legendary moonshiner and it is also a good way to learn how to make quality spirits the same way bootlegger moonshiners once made this fine tasting beverage.

If you want to learn more about other famous moonshiners or need to find some of the best moonshine recipes then you should also check out some of our other pages.

HowToMoonshine is packed with information on all the best and different ways to make your own fine tasting drinks. Click here to be directed to our other recipes or click here for our popcorn sutton moonshine recipe.